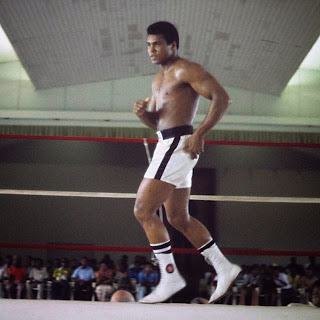 If you've watched Muhammad Ali's early fights he used to move a lot around the ring. He would dance around light on his feet and pick his shots to gradually wear you down. He liked to pepper his opponents with jabs, step back to counter, occasionally threw straight punches, left hooks, and never hesitates to knock out an opponent if and when the opportunity arises (usually in the later rounds) but he was always cautious never to force it.

"Boxing in circles" is a style which exposes a fighter with suspect fundamentals.  It tires you out and makes you commit mistakes out of frustration (Catching up), and leaves you open to counter punches if you overreach to your moving target. There's also a tendency of being caught off balance while throwing a punch yourself as you move forward. The efficacy of this evasive style may be negated if one is able to counter it by effectively "cutting the ring" usually to trap you in a corner or against the ropes to force a fight. It is therefore imperative that a practitioner has enough endurance and leg strength to sustain this approach. Ali was a very smart fighter and an impeccable ring general, thus coined the phrase "Float like a butterfly, sting like a bee." This is not as easy as it seems and requires great anticipation when timing, evading incoming punches from various angles, however it affords you an advantage of being able to control the pace of the match and maintain proper distance like a Matador to a bull; a strategy which many misinterpret as "running" and "cowardice" as when Floyd Mayweather Jr. fought Manny Pacquiao in the "Fight Of The Century."