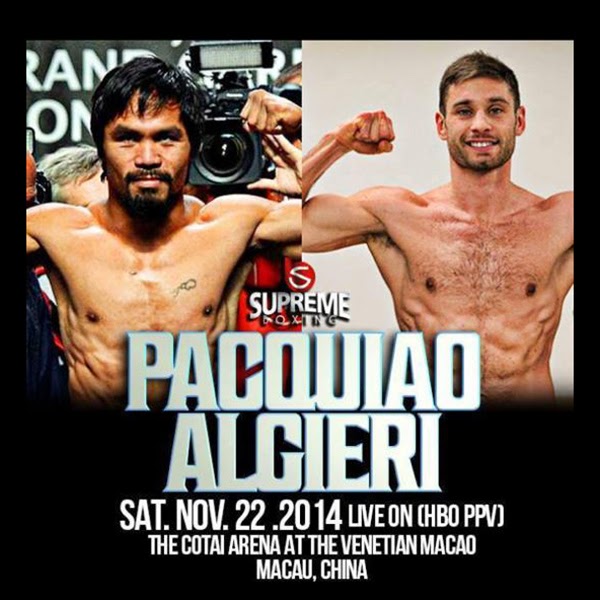 I watched clips of Manny Pacquiao train like I read a heavyweight
book- carefully reading in between the lines, attempting to string
facts altogether to finally see the bigger picture. While most have
been blinded by the Filipino's whirling hand speed the first thing I
focused on for quite a while, again and again, was his legs 'cause
that's what's needed to win this fight against a ring general like the
unbeaten American, Chris Algieri.

The more I think of it, the more I am convinced that Chris Algieri
cannot fight any other way even if he had wanted to. I asked a friend
of mine, Luis Collazo, a former WBA Welterweight champion boxer who
lost to Amir Khan last May, who roots for Algieri to win, and he
confirmed my suspicions. Both boxers are from New York and have
trained together. Christopher Mark Algieri aka "The King of New York"
lacks punching power. He uses his height and reach advantage, moves
and sets things up nicely and lures opponents to come in. His Master's
Degree may not help in a fight, as coach Freddie Roach says, but being
smart does.

I closed my eyes to focus on sound. No matter what people say or what
you might have read elsewhere you can tell it for yourself. From
Pacquiao's cardiovascular system that transports through his veins
this mythical fuel that finally erupts in compact throbs as his gloves
hit the bag; the heavy rapidity and power with only subtle breaks, the
angles of the sounds and bass for a tactical span. Without sight you
can tell Manny Pacquiao still loves his main sport in a heartbeat.
That has always been my main concern to watch him train.

Manny Pacquiao needs this deep source of energy to propel his legs and
catch up with a constantly moving target. First, he needs to deal with
the long jabs, which he usually does with head movement and slips.
Most of the time he likes to go under it, as with Dela Hoya, which
would be a smart thing to do for a short visit to the mid section
before rising up for hook. None of these things are possible without
powerful legwork. Algieri has a habit of halting when defending
against body shots and Pacquiao is most likely to capitalize on this.
Algieri is not as slippery as he thinks he is and is considerably
easier to trap in a corner with feints, despite the constant movement.
I reckon Pacquiao will eventually knock him out late in the fight.

In such a brutal and inherently violent sport, what makes Chris
Algieri dangerous is beyond physicality. He understands his weaknesses
and must have learned invaluable lessons after his victory over
Provodnikov. He knows that if he fights Pacquiao toe-to-toe he is
going to be obliterated. He understands his weaknesses and most
importantly he accepts and addresses it, and I won't bet on him doing
anything foolish in the ring. One has to be very consistent and
aggressive in breaking a man who knows his place. "I always root for
underdogs." Says Collazo. "But he's true to his craft and it is rare
if he changes his fighting plan. Just got to let Pacman come in and
pick his shots."

Special thanks to Luis Collazo for his valuable inputs on #PacAlgieri