Learning From The Champ: Wayne McCullough 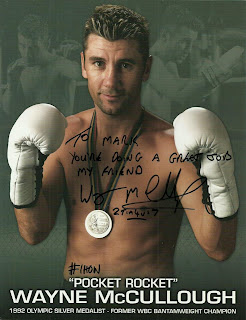 I was back in my room after a few days stay at a backpacker’s place in an island close by called Guimaras. It was already late to go for a workout in the gym so I decided to open this half filled bottle of red wine, made thin slices of cheese and turned on my laptop to watch some of my old boxing files.  I started with an old video of a skinny young Mexican fighting at Lightweight who’s baby face and fighting style has very little semblance to his father, the great boxer Julio Cesar Chavez.  I skipped on a couple of videos after that and closely reviewed Wayne McCullough’s fight against one of my favorite fighters of all time, Erik “El Terrible” Morales and wondered how it feels to actually fight against a boxer of this level; to be pitted in the ring alone versus a man whom many considered as the best technical boxer in the world during his prime.  The warmth of the liquor gradually started to settle in and I relished its aftertaste as I leaned back and sighed, alone in my room close to the rocks that withstood the sea.

A man has to have a lot of character to ultimately decide to become a prizefighter for a living, leave alone the courage to face the best in your division.  In my mind I conjured the values I believe a man ought to have to survive in this world.  I thought of all the good times I’ve had in my life and those wonderful memories streaming in my head, and wondered what I must have done right during those days that had kept me at the right track.  I wanted to hold on to it, you know, find out what works and keep it in place like a bookmark inserted in a Heavyweight literary work so you can turn back to your favorite page in that book on a bad day and re-read it.  It soothes me whenever I do that.  But bad days could mean you’re at the right track, too, if only for the purpose of learning from it.  I gazed away from my computer screen and past the white walls of my room and projected out a vision of Wayne McCullough’s dogged determination in all his fights and was simply amazed by it as if watching on a theater curtain.  Maybe that’s the kind of toughness I need in times of hardship, I thought.  Most people forget how hard it is being a man and being able to stand up for yourself and those you love in every situation you find yourself stuck into. Like they say, a man’s gotta do what a man’s gotta do, and I say the toughest way to do it is when the ones you love lose their faith in you.  I’ve been through a lot over the past years; this year being one of the roughest.  My father passed away when I was young and I practically became my own man since then, so it’s hard to be soft even if I wanted to.  I think about all these and it sort of falls into place.

I got back to work on the fight that ought to have been awarded the Fight Of The Year.  Erik Morales, who was undefeated at that time, stated during the post-interview that this match was one of the top three toughest fights in his career.  Coming from a pugilist of his caliber who, before their match up, had knocked out all nine of his previous opponents that statement was truly something.

This was all the WBC boxing legend had to tell me in response to my shower of accolades to him for his gritty performance and subsequent achievements in his prizefighting career, including a fight with Naseem Hamed.  Whenever I look back in recent memory I find this statement bookmarked in my life book when I’m re-evaluating the meaning of the values of power and toughness. Wayne has indirectly taught me once again that true strength lies in humility, and that a man need not impose on others just to prove his dominance.


Mark currently lives in Iloilo City and can be followed through http://twitter.com/markfvillanueva
Posted by Mark F. Villanueva at 10:49 AM