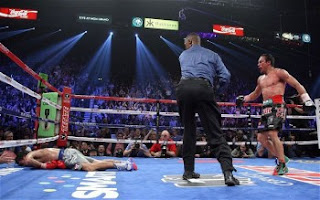 Dateline: Las Vegas, Nevada, December 8, 2012 - The crowd of the MGM Grand was charged with intensity as they eagerly searched for an end to nearly a decade of bitter rivalry between the Mexican prizefighter, Juan Manuel Marquez and Filipino boxing superstar, Manny Pacquiao.  The odds once again swayed in the latter's favor, measured in the usual terms of age, speed and power.  But a large chunk of favor, too, is given by those who only watch boxing whenever the amiable Pacquiao fights merely on account of their affections for such a humble superstar.  His entrance was accompanied by the dramatic flair of dazzling lights, robust sound and various effects and cheer that overwhelmed everyone inside the arena, except for the bigoted, Juan Manuel Marquez. He remains adamant of being a recipient of bad decisions against his nemesis all these years.

Marquez enters the squared circle with steel nerves. Spectators anxiously scoured the ring for subtle clues of new strengths and weaknesses, unfurling tactics, adjustments, and slight openings which either fighter may skillfully take advantage of.  The noise of the large crowd was drowning as they were themselves of anticipation. Manny Pacquiao was his usual energetic self.  The atmosphere was sweeping in alacrity at every move each fighter made, but the deadpan look of Marquez seemed to defy all of it. Prayers were offered by optimists and the religious for the crowd favorite, who is himself an avid believer of the word.  Pessimists dismissed Marquez' chances with vague judgments. The Mexican sternly stood by his beliefs and kept it as hard and concrete as facts as any realist would.

Marquez has a habit of moving his left hand, with both arms high in guard position, that betrays his rhythm. It is like the long hand of a clock that he uses to time his opponents. He never fails to clock it as if aided with a device, if you watch closely, being a crafty counter-puncher. It is also distracting to fighters he face who are cleverly carried away to dance to his beat. This timing device is his solution to Pacquiao's broken rhythm and awkward style of fighting that makes him unpredictable to most.

Juan Manuel Marquez, at thirty nine years old, has mastered the skill of economizing his shots both out of hard work and necessity. Less energy spent allows him to keep his work pernicious. All throughout the match he didn't waste his energy with senseless punches.  With Pacquiao being an aggressive lefty, he would utilize this to his advantage by an automatic counterpunch followed by a left uppercut to the body as he funks a jab. If the situation requires it he moves to his right and puts more meaning and value to his side-slips with an added left hook and a well placed uppercut. He always leaves a dump of exclamation to end his combinations.

Everything is calculated and numbered for the Mexican as evidences presented in court.  It is a skill he has developed over decades of practice and discipline, that have been sharpened all the more as rumors of Pacquiao's late night bible studies with pastors brought abroad afloat. It is as mechanical, as Pacquiao's studies are spiritual, a complete antithesis with a slant of murderous instinct. As Manny Pacquiao lunges in to throw punches in bunches with lots of misses, the Mexican responds with clear, carefully placed shots.  These are events that leave a marked image on the minds of the judges in case a fight goes the distance.  The knockout was merely a nail in the coffin. Leastwise, this is the complex groundwork of the belief of every Marquez follower, that the latter should win a decision on points with the fruits of his efficiency, craftiness and, of course that trademark Marquez' resiliency that is the foundation of this very rivalry.

The fourth fight continued where the last one ended. Pacquiao was as careless with his aggression, always thrusting off balance with his right hand down, as Marquez was accurate. The first time Pacquiao went down in the third could be argued against by some experts for it's element of surprise. It could have been just one of Pacquiao's many lapses. But instead of learning from his mistakes, he commits a wreath more after he gives the Mexican a knockdown of his own as if he hasn't learned from their first fight when Marquez mightily rose to a draw after three knockdowns in one round. It is not the mistake that was bothersome, but the inadequacy of learning from it.

As Marquez continued to step in and slide out with skepticism as with all intelligent men his left hand's clockwork was calling for an end to his rival. He knew this very well with every ticking sequence and was sturdy against all drama and eclat. He was outpouring with ominousness, bitter against God's will for his past losses.  He made his way around the lot mockingly, insisting that victory was his and will be his despite the prayers against it.

Alas! the bitterness of his heart was exhumed in the midst of Pacquiao's flurry by the end of the sixth.  It came very clear to him as if he had finally seen the light. He leaned back and exalted forth his right arm in prayer, threw it with all his might, as if to tell the world that he, Juan Manuel Marquez of Mexico, was the rightful victor of the past fights aggrieved; that politics and and popularity will never draw out another wrong decision from the judges this time around; that he was in the right when everyone laughed at him; that religion is an irony that has dulled his rival's prizefighting career and would never bless him with another meaningful win. Finally, as if to say that his own silent prayers emanating softly in the privacy of his room are just as effective and draws the line between his spirituality and religiousness; that he too is equally worthy of glory; that self-discipline, unwavering devotion to one's profession and focus is consolidated as the most coveted answer he had kept secret all along which Team Pacquiao could not have seen with all the distractions drawing their attention towards the wrong direction.

Mark currently lives in Iloilo City and can be followed through http://twitter.com/markfvillanueva
Posted by Mark F. Villanueva at 11:28 PM