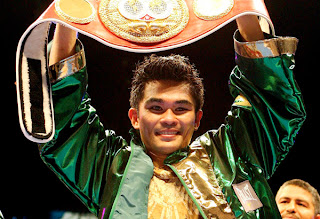 Dateline: Los Angeles, California, November 17, 2012 – For the first time in almost fifty years the World’s Flyweight Boxing titles are unified. A massive celebration is in order and the Filipino-American boxer, Brian "Hawaiian Punch" Viloria played host to it by delivering the first knockdown of the evening at the first round with a sweet right hand shot to the Mexican, Hernan "Tyson" Marquez' chin.

Viloria, known throughout his career for his quick counter-punching abilities and one-punch power, surprised many spectators by coming out offensively. After Hernan Marquez survived the first knockdown by managing to tread onwards the succeeding rounds many started to grow weary that Brian Viloria might fade later in the fight as he had against Carlos Tamara two years ago in a match held in Manila. But there was something different in Viloria during the whole time. He seemed highly focused and determined to follow up on his impressive start as he forged on with one crisp shot after another, which is a testament to his overall readiness and conditioning. He continued to put pressure, moved forward and cut the ring, which backed up and displaced Marquez from a style he is most comfortable with. After his namesake, Mike Tyson who was loved as a professional fighter for his offensive repertoire, it was odd watching "Tyson" Marquez step back and settle on the defensive end.

It was a fashion of fighting he did not conform to and later on abandoned, but at a great price.

The fifth round of this historical event was epic. With Brian “Hawaiian Punch” Viloria leading in all rounds leading to it, Marquez sneaked in a shot that seemingly rocked the Filipino. The Mexican quickly took advantage of this and pummeled Viloria with all he's got like a gate crasher looking to spoil the party. There was horror in the minds of Viloria's supporters during those heated seconds thinking that the referee might stop the fight. The Filipino was pinned in the corner, unable to punch back, surviving.

Viloria took advantage of this minor setback to sap his opponent of his power, as the latter poured in so much energy to beat him up. A natural counter-puncher, he knew by heart how and when to ride on the barrage of fury, and when he did so with hooks and a one-two combination he made sure the Mexican would go down hurt and in part exhausted.

Brian Viloria displayed a whole new array of skill all night. It was as if the "Hawaiian Punch" was up to serving a long line of drinks of a variety of flavors to all those who've come to watch him fight. He looked very confident and strong and lively with his green trunks that glittered gloriously. It was like lime and lemon drinks that were served and moved around for the guests as he danced in the ring. Then he would mixed it up like a bartender to his guests; change pace, stop in the middle and counter, shuffle it a little bit, and then push the fight back, and then turn with his hooks that confused the Mexican. Unlike in the past where he merely waited for offense to come so he could counter, Viloria did most of the instigating all night, prodding those jabs and going to the body with power and impeccable timing. He stirred his opponent, shook him when he had an opening; He mixed all flavors just right to achieve an effective hit.

In the tenth round of the match the Mexican's frustrations would take him down. Hurt, confused, unsure of what to do next, and with his coach Robert Garcia yelling at him from the corner, he started to breakdown mentally. He kept coming in with reckless abandon, maybe out of pride, which gave Brian Viloria an easy opportunity to knock him down yet another time. At 24, like most youthful, intoxicated partygoers he didn't know when to stop and fought on up 'till the referee had seen more than enough of it and stepped in like a cop to stop the fight.

At the peak of the celebration, the Mexican boxer was punch-drunk.

Mark currently lives in Iloilo City and can be followed through http://twitter.com/markfvillanueva
Posted by Mark F. Villanueva at 2:15 PM