Zab Judah's Performance: No Khan Do 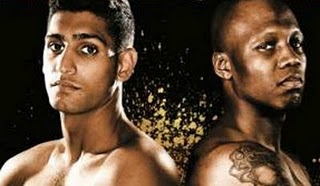 Dateline: Las Vegas, Nevada, June 23, 2011 - English Boxer, Amir "King" Khan continues to rise from the rubble caused by his only defeat against one Breidis Prescott in Greater Manchester. Since that devastating loss back in September, 2008, Khan has crossed seas to team up with one, if not the best, boxing coach in the wold, Freddie Roach, and he's been gaining momentum heavily along with new believers at every outing, winning every fight since their fateful team up. Khan already holds victories over popular prizefighters such as the Mexican MarcoAntonio Barrera, the outspoken Paulie Malignaggi, and power puncher Marcos Maidana. This time around he was met by a resuging powerhouse in American, Zab Judah.

Fighting Orthodox, the tall fighter from Bolton used his left methodically. He pumped it to it's full extent without overreaching it that it becomes a liability. This jab would consistently place the smaller opponent with the shorter reach at bay all throughout the match, much to his dismay. That left jab was sometimes followed by a left cross that immediately swiped defense lines across the opponent's face if it didn't land, leaving him tentative against crossing the invisible barriers that Khan had built. Judah would veer away, attempt to move forward to machinate but did so dubiously to make it an effective one, as if crossing a live minefield, and then he'd back off and move away. It was like that all night as the younger and busier Amir Khan kept following an effective game plan devised by his stern American coach, Freddie Roach. And although Zab Judah, too, to his credit, was quick and slick, it appeared as though he had nothing much to fire back in return.

Personally, I'm not so fond of fighters who allow themselves to get hit in order to hit back with a harder shot of their own, although many boxing fans find that exciting. I admire fighters who are deft and slippery operating in and out of harm's way just as the slick American, Zab Judah is known for, and who tried his best that night to emulate his mentor Pernell Whitaker. But it appeared all night as though that slick style had been overwhelmed by Khan's offensive repertoire as a dot of oil in a pale of water. Amir Khan was all over him that night and never showing signs of tiring out just like stablemate Pound For Pound No.1 Manny Pacquiao with whom he shares the same coach and a strikingly similar fight approach. Judah would successfully evade one or two rapid shots thrown at him but would never be completely shielded from the series of punches in succession. Khan was very precise with his punches. He was very aggressive but not forcible, thus maintaining his efficacy. Judah would attempt to fire back with combos of his own but his machinery was always shorthanded against his taller foe who exploited his height and reach advantage to its full extent. His face was puffed and blood trickled down his nose. Khan was practically unscathed. In a match up dubbed as "Attack And Conquer" it looked as if there was no attack in Judah, who was always forced back on the defensive.

After all the talk of "schooling" Amir Khan during the pre-fight press conference, the veteran Zab Judah was shut out completely coming into the fifth round. It's not that it appeared as if he had nothing left as a professional boxer. He remains dangerous and clever, in fact, I think he would do very well against other 140 pounders out there. He could still be a champion once more. But Amir Khan was just performing all too well that night. He continued to rise above the crowd's expectations. From that point on, most of Judah's followers must have been hoping for a one shot, one kill, sneaky punch to end it all which wasn't really that far out owing to Khan's susceptibility for eating uppercuts, and Judah's raw power. That was the atmosphere at the start of the fifth round. Most spectators now banking on a jackpot, and khan's followers known as "Khan's Army" held unto their seats, weary of a Phantom punch that might shatter their already palpable victory.

It never came. Well into the fifth round, Zab Judah grimaced in pain as he knelt on the canvas after what the video replay shown as a legal body blow right at the belt line, hit him. The more logical way to protest the knockdown call by the referee was to contest while standing up, but he let him count away kneeling with his head down against the floor.

Maybe the pain was so that it was unbearable for him to stand. Maybe it was actually the punch to his face right before he got hit in the body that really hurt him and kept his head spinning. Some argue that he just wanted out of the fight and found an excuse to do it. But whatever the case may have been at that exact moment of confusion, there was no question that Amir Khan had simply dominated him from start to end. Statistics do not lie. I'm not very good with numbers, but I know that's where the spin stops.

Mark currently lives in Iloilo City and can be followed through http://twitter.com/markfvillanueva
Posted by Mark F. Villanueva at 6:31 PM