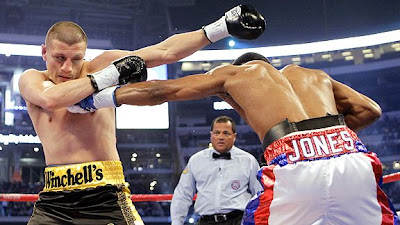 They say you never mess with a man who fights with all he’s got.
That’s exactly what 27 year old undefeated Welterweight boxer from Philadelphia, Mike Jones did when he fought in the undercard of Pacquiao versus Margarito last Nov. 13, 2010 at Texas against Jesus Sotto-Karass from Mexico. The lanky Jesus got pounced with hard punches right at the outset of the fight as the much younger and sturdy Jones displayed brilliant boxing skills and fast combinations early on that kept spectators in awe. Jesus really looked slow and seemingly doomed to be outclassed, and had the look of a fighter who had no clue on how to deal with the blitz. He just took the shots, completely dumbfounded, and barely surviving. At the second round of that fight, still unable to find a solution to neutralize Mike Jones’ offensive, the dazed Mexican continued to take more beating before finally getting knocked down.
At that very moment, in my opinion, all Jesus Soto-Karass had left was pure tenacity; that Mexican pride in him that sprouts an unwillingness to give up and to die trying. He practically had no idea on how to counter his foe, or, maybe he had his plans, but didn’t have the capacity to overcome the natural abilities of the very athletic Jones. Luckily enough, Team Jesus Soto-Karass didn’t have to spill out a magic plan under time pressure on how to neutralize their opposing corner as in a seemingly immature move by Jones he just started to launch an all-out attack against his opponent. He provided the perfect solution for his own potential demise by tiring himself out.
Jones’ monstrous grunts were followed by numerous power punches that landed all over Soto-Karass’ head and body who remained pinned against the ropes. Mike Jones went for the kill so that if you were sitting close to the ring you would have seen it clearly all over his face and in his fiery eyes. Spectators knew Soto-karass was going down and the fight was going to end, except for some reason he just kept on standing and the fight kept going. As every painful second passed, instead of waiting for the Mexican to go down he just seemed to have gradually regained tad bits of strength as the offensive of Jones went the opposite and started to wind down. The round ended with Mike Jones breathing heavily as he walked back to his corner. From then on everything seemed to turn around unexpectedly and what was supposed to be a lopsided beat down became an even fight as the American lost his speed and power; looking very beatable. Both fighters would alternately switch roles of being beat up against one corner, both swinging wildly on some occasions, barely able to maintain balance. Mike Jones practically made what should’ve been a relatively easy fight his most difficult one by pushing it too hard and running out of gas prematurely.
In the end, most fans believed Soto-Karass had done enough to win the match, but it was an extremely close fight. Mike Jones got the close call. It was a surprising turn of events with full of action that warranted a rematch.
On Feb.19 2011 at the Mandalay Bay Resort & Casino in Las Vegas fight fans will get what they want as both fighters are destined to meet again.
They say you never fight a man who fights his all. But in boxing timing is almost everything. If Mike Jones reserves his energy and fights wisely the second time around I think he wins the rematch the way he was supposed to the first time… with relative ease.
Mark F. Villanueva
Philippine Islands

This article has been published exclusive for FightHype: http://fighthype.com/pages/content9228.html


Mark currently lives in Iloilo City and can be followed through http://twitter.com/markfvillanueva
Posted by Mark F. Villanueva at 4:21 PM