Life And Boxing (A look into Donaire Jr. Versus Montiel) 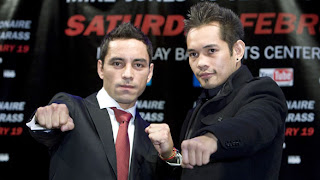 When the time comes for you to step in you know you are in it on your own and all the people you trust for guidance are backed up behind you knowing what you must do once you get into that sacred place must be done by you and you alone. Nobody does the fighting for you. You step inside with the knowledge that one can only be as strong as the values upon which a man is built that have been gathered and molded from sacrifice. For life is a journey full of sacrifices, and the ideals you pick up along the way will be the only tools that’d get you through if you possess the knowledge and wisdom when and how to use them.

This piece is dedicated to my little brother-cousin U.S. Navy Chief Christian Jay L. Villanueva who had lived his life to the fullest, albeit quite a brief one. Born on January 23, 1981 he would have turned 30 years old today. He passed away last January 20, 2011. This is my humble way of saying I'm proud of you for being a winner. You championed our hearts. Happy birthday, bro.


[Note: This writer would like to thank Team Donaire (Through Mr. Marcial) for reaching out to extend their condolences for my late cousin.  I very much appreciate your kindness in these tough times.]


Mark F. Villanueva
Philippine Islands
boxinginsight.blogspot.com
This article has been published at the ff. sites: