An Insight on Juan Ma Lopez Versus Bernabe Concepcion 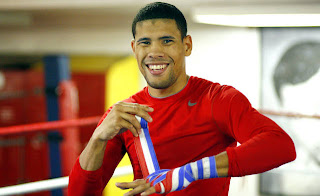 I’m glad that these are busy times for Philippine boxing and our boxers are getting a lot more of the attention they deserve. Barely a month after Rodel Mayol lost his title by unanimous decision, a new local hero was born when an unknown fighter Dapudong, coming from a poor and battle stricken region, the son of a farmer, showed up with nothing but high hopes and dreams backed up with good old hard working attitude to knock out world number one flyweight Jesus Jimenez in Mexico. Albeit, quite expectedly, also came the news that Mark Melligen had won his Welterweight battle few days ago against Adjaho while Condes Nietes prepares to defend his WBO minimum weight crown on August. The fight schedules just keep on coming. Long gone are the days when most Pinoy fighters were treated with disregard. With Manny Pacquiao trailblazing the long and uphill path to success Filipino boxers have achieved something altogether: Self Belief.

First of all, I don’t think Concepcion is a fighter who sticks to his game plan in the long run. As a fight wears on he has the tendency to deviate and fight his own style, almost always looking for a brawl. This is the sport of boxing, not a street fight, and game plans are very vital. I’ve seen him fight against Luevano and quite glaringly we all witnessed impatience take over his game- which by the way, in spite of his natural attributes being supposedly stronger and faster, even with the advantage of an impressive physique against the lanky Luevano, all that never seemed to have been synthesized effectively to work for him that night. You cannot be impatient in a boxing match. This sport is a battle of intelligence and smarts as much as it is physical, although the latter could be a big plus. And I hear Concepcion is not known for his discipline in training.
To win against the taller Juan Ma, a fighter who can brawl as well as be a rangy boxer due to his reach advantage, Concepcion will have to keep it up with his footwork, moving in and out, employing side to side movements for him to set up traps and shoot at unexpected angles. Lopez is quite a hittable guy and I think Gerry Penalosa has exposed that quite well and this is an aspect that has to be taken advantage of. The problem I see with Bernabe is that he seems to lose that agility as the fight goes on. He has a strong tendency to become flat footed during the middle of the game. If he does this against the heavy handed Juan Ma this fight is over. He needs to follow through with his game to score an upset, which is hard to imagine at this point considering what we know of his work ethics and his past fights, especially the last one where He almost lost what was supposedly a lopsided match because he was close to running out of steam that raises questions as to his preparation for the fight.
I understand the excitement. Yet underneath the flurry, from an objective point of view, I don’t see Concepcion winning this one; not by a long shot. 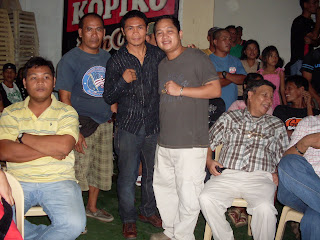 From left to right: coach John Estrella, WBO Minimum Weight World Champion Donnie Nietes and myself during a boxing match in Bacolod City where we met Rev.Henry Guanzon and some of the fighters from his stable.

You may view this article as well at http://www.boricuaboxing.com/ on 7-6-2010- a New York based website for boxing news and updates. Click on this link to be redirected http://bit.ly/buh7p2