Boxing in Our Family 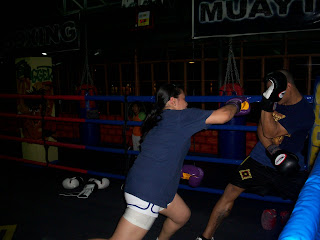 My wife Barbra is also a boxing fan like myself and most members of our immediate family, and when we were together in Manila before my assignment in Iloilo City we used to train side by side at the Elorde gym in Mandaluyong. I remember she was invited many times to participate in exhibition matches between students from other Elorde branches across the National Capital Region but we both had agreed beforehand that she wouldn't get involved in fights; only for the fitness. She used to spar regularly with Jay, whose last name I forgot, who also fought later on that year in the undercard of undefeated Filipino Super Flyweight Drian Francisco. 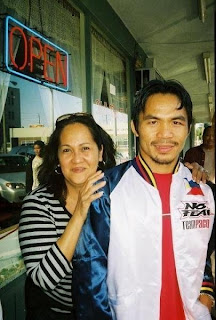 Mom with Pinoy idol and now Congressman, current Pound 4 Pound number one fighter in the world Manny Pacquiao in a Thai restaurant close to the famed Wild Card Gym of Freddie Roach.
Posted by Mark F. Villanueva at 6:33 PM