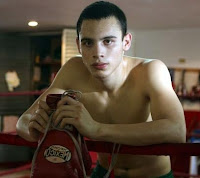 I have to give it Julio Cesar Chavez Jr. I tip my hat to the fighter in him. I predicted through my Twitter account that he would win against the fighting Irish John Duddy by unanimous decision and you cant have it more accurate than that, but I have to give it to the guy. I never thought he had it in him. I've always known he has some great timing with his punches and has a good fighting stance, albeit against not so decorated opposition, yet I feel he had raw talent nonetheless. But today he had risen above criticism against his fighting ability and made the fight against Duddy one that is worthy for the classics. Duddy fought as we all expected him- tough and always willing to stand ground and slug it out, and that is why he is beloved by so many fight fans, but Chavez Jr. turned out to be too much for him in the long run. So now boxing fans know the son of a legend can truly fight in the big league and can endure long battles, has the patience and discipline to stick to the plan deviced for him which is always vital in this highly mental game. This fight today also provided an answer as to who the best trainer in the sport of boxing is.
Humble yet tough guy coach Freddie Roach, who has added Chavez Jr. to his long list of fighters, amidst all the accolades afforded him for his work on Manny Pacquiao once said that the credit goes "95% to the fighter and 5% to the coach." After seeing how much Jr. has changed in his fight today I would say, "Oh, you're worth more than that sir."
Posted by Mark F. Villanueva at 7:45 PM