Why I Disagree With Mayweather's Top 5 Selection 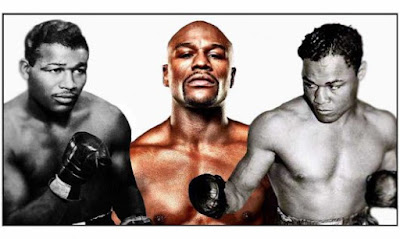 If pride is a sin, what makes you step up to begin with, and farther down that same dignity that pats your shoulder in a dark corner when no one else would; lone, written off, reassures of a better you in the morrow, then it is the devil that pushes fighters to get back up when everyone else have counted you out. It is a virtuous sin that is almost necessary for greatness, that makes Floyd Mayweather Jr. position himself on top of his list of the best fighters of all time:


Floyd's Top 5 Fighters of All Time

It is a list I respectfully dissent, so much that if Thomas Hearns had faced him in the ring, both fantastically at their prime, such an affair would not be a courteous one.  At 6'1 with an eight inch reach advantage, Hearns would control the tempo of that fight with a deadly-as-sin mix of speed and power, with his jab like a baton, as would a conductor to an orchestra.  Floyd Mayweather could be allowed to plank his shoulder like a gangway once cornered and it would not matter.  Hearns would beat him at Welterweight or at the Middleweight division where the same Mayweather who beat Saul Alvarez would be easily torn apart by Hearns or Marvin Hagler.   As freakish as these two boxers may have been at their prime, both were defeated by a graceful and complete fighter, Sugar Ray Leonard, who also beat legends Wilfred Benitez, and even Roberto Duran twice, who's ranked number two of all time by Mayweather.  I wonder why Leonard didn't make the cut to his top five list.  Whereas he has stately seated Pernell Whitaker who'd have nothing against the mythical Willie Pep (229-11-1) whose legend spread like wildfire when he fought Jackie Graves in 1947, that says he won a round on pure finesse of movement and treacherous feints without throwing a meaningful punch.  I could take it that Muhammad Ali is ranked fifth in his list, but how about the man that prompted the creation of the Pound For Pound rankings in the first place, revered by many as the greatest of all time, Sugar Ray Robinson (173-19-6-2) ? And whatever happened to Henry Armstrong, who held three world championships at Featherweight, Lightweight, and Welterweight all at the same time?

Floyd states in his defense:

"He's beat more world champions than any other fighter right here. He's done it in a shorter period of time than any other fighter up here. And he's done it with less fights than any fighter up here. Record breaking numbers all around the board in pay-per-view and live gate, landed punches at the highest percentage, and took less punishment. And done it in 19 years and been world champion 18 years. Done it in five different weigh classes."

I agree. I see that Mayweather's boxing career is the best managed of all time, and himself one of the greats.


P.S. - This article is dedicated to a dear cousin who passed away today.  Ian Magno has supported the cause of the Villanueva Boxing Academy for the underprivileged youth since day one.  Rest In Peace, brother.
Posted by Mark F. Villanueva at 2:27 PM