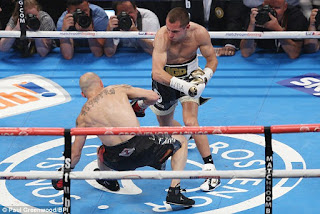 It nearly took three years for Kiko "La Sensacion" Martinez to get a shot to avenge his first knockout loss against Irish Carl Frampton back in Feb. 9, 2013.  Along that arduous process of redeeming himself he won the IBF Super Bantamweight title against Jonatan Romero, made two successful defenses by knocking out both opponents Jeffrey Mathebula and Hozumi Hasegawa, but the questions in his mind borne on one bad night remained.   These doubts fueled his desire to train harder as before until he finally earned a rematch in September 6, 2014 but only to end up losing once again to the same feisty Irishman.

At the Manchester Arena last July 18, 2015 the WBA Super Bantamweight champion Scott Quigg stepped inside the ring to bar the Spanish brawler's road back to redemption.  Quigg started to come in, athletic as always, and control the center only to feel the heaviness of determination of Kiko Martinez, whose swarming, brawling style of fighting had earned him a record of 32-5.  Although undefeated, Scott Quigg had earlier recognized this match up as the biggest test of his career, given Martinez' overall experience, and since Quigg had never fought outside his country.  With Martinez putting on the pressure, the Englishman was sidetracked, and kept moving clockwise around the ring.  Kiko Martinez raised his punch output and the WBA champion covered his head with both arms up.  There was constant movement and pressure pushing outward and around the rim like oil in a glass full of water.  And like water, Martinez dominated the first round.

The second round ensued with a faster paced Kiko Martinez, who was determined to trap Quigg in a corner and break his defensive science, as a swarmer ought to do.  He kept lunging in with bigger steps now in a momentum of a diesel engine, and the undefeated Quigg did not punch enough to dislodge that pressure.  He did not throw enough jabs to at least keep his foe at bay.  Martinez was catching up increasingly with growing confidence.  If it went on to the hilt in this manner he certainly looked like he could win it, and he'd be a world champion once more.  He threw a jab that was followed with a limp.  At first I thought Kiko Martinez weaved in anticipation of a counter that did not come.  It came simultaneously from underneath his left jab that landed on his chin. The sequence had a striking similarity against his first encounter with Frampton who struck him with a right hand too.  It was a right uppercut this time.  A projectile that unmasked the force that pushes all fighters to be at their very best. Quigg smothered Martinez till he started to sway and fall with his back on the floor.  The turnaround of events happened fast and so unexpectedly that as Martinez fell for the second and final time his hopes for a comeback fizzled into dredges at the very bottom of his spirit.

I hope to pen my insights on Scott Quigg versus Nonito Donaire or Guillermo Rigondeaux next.  We hope Kiko Martinez finds himself in this helical stage of his career.