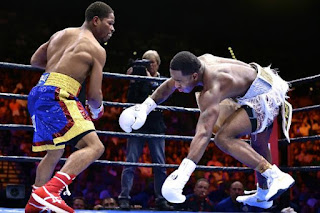 Dateline: Las Vegas, Nevada, June 20 - What the mind had conceived, the body failed irreparably to achieve.

The brazen boxer from Cincinnati entered the ring with a swag that bespoke volumes of his supposed greatness, of skills a sure-fire, and worthy of a spot in the Boxing Hall Of fame.  Just moments into the first round he showed spectators a glance of his adroit hand speed and authoritative form.  He likes to shake his head to further intimidate whoever he fights against; a sign of dismissal, of invincibility or some sort. From a distance, onlookers recognize a striking semblance between himself and the self-proclaimed best boxer ever.

Shawn Porter forged on without compunction according to the game plan carefully contrived by his team.  He had to drop in weight to make this fight happen, among other concessions.  He has a shorter reach and is not as nimble, so he studied his opponent with respect.  He bounced around a bit light-footed, yet never tentative.  The moment he saw an opening he lunged forward with his heavy left that caught the other man, and followed this quickly with hard combinations to the body to take advantage of his early success.  He conscientiously adhered to his game plan of overcoming his opponent with raw strength and power and effectively cut fighting distance. He consistently put pressure and pushed his opponent to his limit in a way he knows best.  Shawn Porter threw overhand rights, flexed his shoulders before driving hard punches straight to the body, hoping to negate his disadvantage in speed by the later rounds.  Surprisingly, his lunging jab kept finding its mark.  He is not what one would call a beautiful boxer, yet he's more of a hard working man in the ring; much determined upon the urging of his own father in his corner.

As the fight progressed, the ostensible greatness have become gradually chopped down by the seemingly unrelenting mundane.  Floyd Mayweather Jr. could have done things differently by this stage.  More likely, he could now have adjusted his defense and is able to time his opponent better.  But it wasn't a legend Porter was facing, nor Floyd Mayweather Jr.  The illusion of that greatness had been broken down gradually against the ropes, and what's left of that breakage reveals a problematic Adrien "The Problem" Broner, who appeared a mere vessel, or even a great actor merely playing out a role.  Some time in the tenth, Porter pivoted to his right, shifting Broner against the corner like a plagiarist in a cage.  That must have been the only time during the fight that he had executed with grace, yet at least he was his best imperfect self.  Shawn Porter must have hurt him numerous times in the fight, for Broner's offense have clearly deteriorated.  Porter hit his body hard after dodging a left hook, whenever he got pushed back, and just about every time he had a chance. It was Porter's actual body work, and not Broner's imagination that was the key to the fight's success. He was knocked down once in the fight, during the twelfth, but got right back up as all honest and hard working men do, who risk so much for a dream, while the rest dream on.