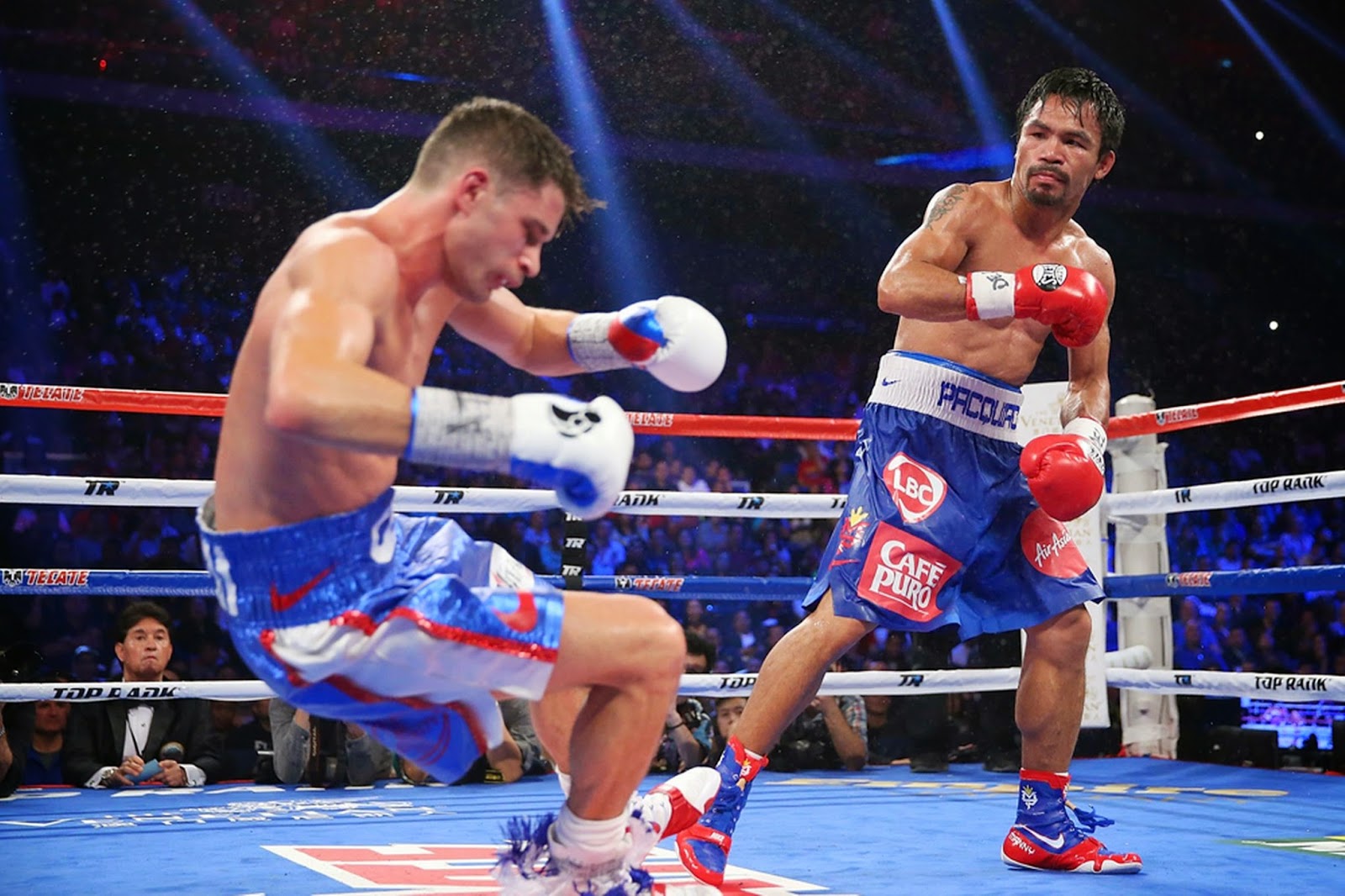 The Venetian Macau - It's been a while since Manny Pacquiao had knocked out an opponent cold and the drumbeats are on, conjuring a distant memory of a quivering Hatton.  American boxer Chris Algieri comes in as seemingly the perfect pick to end that naught.  The tempo has been set early on by the battles of Vasyl Lomachenko versus Piriyapinyo and Jessie Vargas versus Antonio DeMarco like a peaking crescendo in flashy Macau. And then Zou Shiming fought Thailand's Onesongchaigym, and time became painfully slow.  Shiming clowned with his opponent, moving against the clock with a smirk on his face and both arms dropped to the waist.  People next to me started to bicker.

I was hoping to see Manny Pacquiao share that sense of eagerness and urgency, but didn't. Chris Algieri fought the way I expected.  He starts with nice jabs and most of the time kept moving away with all the bravery he could possibly muster.  He mixes things up with a left hook and a lead straight until this becomes a cliche phrase that a fighter of Pacquiao's caliber easily reads and shuns in distaste.  Pacquiao drops him early.  He dropped him six times in the fight.  Algieri managed to keep moving with superb conditioning but now more top-heavy, leaning hard on both sides with his lanky frame.  At times it looked like the Filipino champion didn't have to do much more than wait for the right timing.  It looked like the American would eventually knock himself down as he kept swaying with his poor balance anyway.

The Manny Pacquiao of old that we have all been longing for was up there in the ring... somewhere. With less than a month to go before Pacquiao turns 36 years old the number of people who doubt his abilities are growing.  There were moments when he could have took advantage of a situation to turn the fight around, and you could tell that he detected them as Algieri's style isn't really too deceptive.  He wasn't rushing things either.  The best way to limit the efficacy of an opponent's movement is to wear him down by applying constant pressure, aim for the body, roughshod him to the ropes- a fighting style Manny Pacquiao is known to be very good at.  Yet after knocking down the American a couple of times, even as he was past the precautionary stage, after the ninth when the fight could have and should have ended, the Filipino champion settled for less against a physically torn opponent.

In my humble opinion, it was not so much that Manny Pacquiao had failed to finish off Chris Algieri.  How could he have failed when it seems he never really tried? The speed, stamina, and power were all there. The killer instinct may have diminished but there is no way of proving that. So the question remains if the Pacquiao of old is finally back. I think the question should be, did Chris Algieri pose the level of challenge needed to invoke Manny's best? I bet the Manny Pacquiao we know is too humble to say No.


Mark currently lives in Iloilo City and can be followed through http://twitter.com/markfvillanueva
Posted by Mark F. Villanueva at 6:37 PM