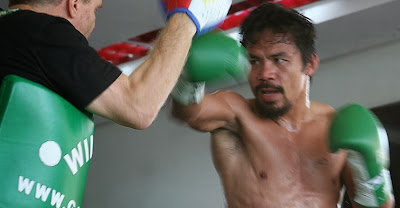 Manny Pacquaio’s fight with Brandon Rios takes on a whole new importance for the typhoon-ravaged Philippines – a country in desperate need of some good news.

An eerie silence will descend on the Philippines at around 10am on Sunday. In Manila, usually one of the most dangerous cities in the world, the crime rate will drop to practically zero for 45 minutes. From the capital, to the Typhoon-hit central islands and south to General Santos City, Filipinos will be crowding around TV sets to get a glimpse of their national idol, welterweight boxer Manny Pacquiao.

In a developing nation not known for sporting success, every ‘Pacman’ fight is a big deal. But Sunday’s clash with American Brandon Rios in Macau will have special significance in the aftermath of Super Typhoon Haiyan. With over 11 million Filipinos affected, more than 3900 people confirmed dead and over 1000 still missing, the island nation is desperate for some good news.

“The people deserve to be happy again,” says Mark F Villanueva, who owns a boxing gym in the Typhoon hit province of Iloilo.

“I have lots and lots of faith in humanity and I hope a win (for Pacquiao) would give smiles on their faces.”

It’s difficult to overstate how big a star Pacquiao is in the Philippines. More than a just a boxer, he’s an actor, pop star and philanthropist. He’s also a congressman and is widely tipped as a future presidential candidate.

“A lot of people died for that storm,” Pacquiao told an HBO documentary crew last week. “I want to help them. All the people… I want to dedicate this fight to them. I’m praying for you guys. May god bless you.”

Television presenter Belle Daza, who co-hosted a game show called ‘Manny Many Prizes’ with Pacquaio, says he embodies what it is to be a Filipino statesman.

“On the show he coined a nickname for himself as ‘ninong’ which means Godfather,” she said.

“In Filipino culture our Godfather represents the gifts or money they shower us with.

“I think the fight will be important because in a way it distracts us from the pain we’re going through right now.

“And if he wins we will have something to smile about again.”

That win, though, is a big if. The 34-year-old superstar hasn’t fought in over a year and was knocked out by his arch-nemesis, Mexican veteran Juan Manuel Marquez, in his last fight. And as comeback opponents go, Rios is no soft touch.

A heavy-handed pressure fighter and natural clown, the Californian couldn’t be more different to Pacquiao. Where Pacquiao is quiet and measured, Rios is loud and brash. While Pacquiao deals with his very adult responsibilities, Rios seems like an overgrown child with a hyperactivity disorder. He certainly made himself easy to cheer against when he mocked the Parkinson’s disease that Pacquiao’s trainer, Freddie Roach, suffers from.

So a loss to Rios would be deeply hurtful to many Filipinos.

“When Pacquiao got knocked out last time I almost choked,” says Villanueva.

“Let’s not talk about how the reaction would be if he loses again.”

Alex McClintock is a freelance writer from Sydney. He tweets at @axmcc


Direct link to the news: http://thenewdaily.com.au/sport/2013/11/20/manny-pacquiao-fights-philippines