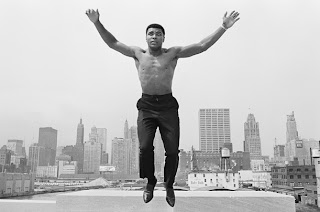 A friend of mine told me about something he'd read, that to find peace and be settled in life one has to figure out what it is one is running from.  Not being much of a runner myself I rather look at the same view from the stance of a fighter.  Always find your center.  Just as a boxer moves with perfectly equated weight distribution on both sides of his body find out what it is that drives you and hold on to it, and then start moving on from there.  Accepting the weight of whatever your center may be gives you stability and automatically gives you an approximation of things around you 'cause each and everyone of us are innately born with logic.

It is an irony, though, with life itself being the biggest among ironies, that I speak of logic when love, being the strongest driving force in the world, is beyond explanation.  That part, I don't have the capacity to clarify at the moment.  But know your center still and I believe everything becomes clearer for you moving forward or back (in retrospect).  For sure, it simplifies matters just as you look across the window and you automatically have a quick estimation of how long it'd take you to walk leisurely down a corner.  And you won't keep on waking up in your bed, if you're lucky enough to have a home, wondering what it is you live for and what the main purpose is of your being.  Knowing your center, your driving force, you are able to tell if you are going the wrong direction, going past, or not doing good enough to catch up with it.  One more thing is that you are able to focus your energy and maximize it with what matters and whenever it's called for.  That is how the best boxers don't overdo things.  They know when to come in or step back, their punches are committed yet don't get thrown off balance by their momentum, their estimations are lethal with proper training, and discharge with great timing from a relatively safe and balanced ground- thus, the definition of the sport, "to hit and not get hit."  And that is why no sport mirrors life like Boxing.  In vice versa, live the way you ought to fight- with meaning and purpose, and that focal point of your existence will give you an equable force.

Down at the gym the boxing scholars of The Villanueva Boxing Academy ranging from eleven to fifteen years of age are nearing the middle of their training in preparation for the elimination round of The Batang Pinoy Boxing Competition in Roxas City this coming September.  It's a tournament we have previously won Gold and Bronze medals.  Their eyes are fixed at the prize, and for a change the prize is not money, at least not directly.  It is not how they are trained in this old school type of Boxing gym for the underprivileged youth.  The very fact that they are off the streets make them champions.  Downstairs, one Harry Camacho works the heavy bag alone in a corner and as he kept ramming his fists the sound of its integrity resounds against the washed up walls that reveal signed photos of boxing legend Wayne McCullough and actor Neil Jackson with adamant expressions of encouragement.  On the second floor a ten year old kid with sorry eyes is too young to box and can't wait for the next year to come, and watches the rest practice with coach Estrella dictating the routines.  Christian Dave Jumento, 15 years old, a natural counter-puncher shadowboxes.  Brothers Jules and Justin Victoriano works a drill with John Paul Alapar.

In a sport stricken with corruption these kids are armed with character and traditional values, but they don't know it yet.  It is a place a once poor Manny Pacquiao might have hoped existed in a time when nobody else was there for him.  And now each time he wins Billions of Pesos from a single prizefight the government ushers him a redundant million.

Outside the gym one could hear the sound of simultaneous punches, skipping sound of the rope, rattling of the speed ball and the heaving of the upper floor.  The Villanueva Boxing Academy beats life. 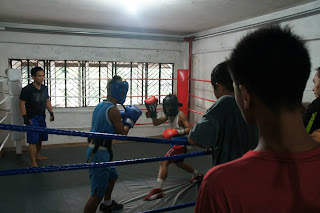 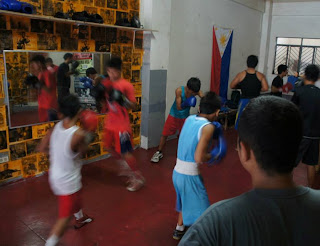