Mark Villanueva: A Man Who Dares To Dream (By Corey Quincy) 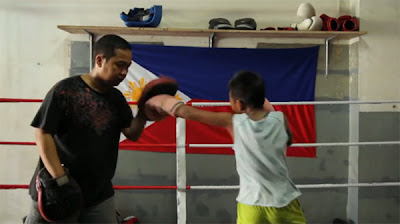 No one can say they have seen what Mark F. Villanueva has seen, or certainly done what he has about it.

Living most of his life in the Philippines, Mark Villanueva, a boxing trainer and journalist has been forced to cringe at the sight of the city’s youth on the streets as his worldly domain gradually depleted. It’s now time someone takes a stand! With his heart on his sleeve and a dream in his pocket Mark F. Villanueva is spending every day working to get young life-fighters off the streets and into a boxing gym.

Why boxing? That’s the easiest question one can ask Villanueva, a man born and raised in a boxing family. Locally, basketball is the sport you’ll see children and young adults pursuing. Even though Villanueva never participates as a fighter, as a trainer and as writer he has a special place in his heart for the fight game – and deep memories of these close times with his deceased father lie within.

What is Mark’s goal? His drive? That tingle in his head that tells him he isn’t aiming for a lost cause? The people. Growing up in IloIlo City his life philosophy is based on a Muhammad Ali quote “Service to others is how you pay rent for your room here on earth”. Many children view themselves as a lost cause, starving on the streets, being absorbed in gang violence that places them in unimaginable dilemmas.

For years Mark Villanueva committed to making heart liquefying and hosting charity events. He became discouraged citing the long-term nullification they had. So now he is on the front lines. Working with individuals as he himself takes inspiration from some supporting names in boxing including promoter Lou Dibella, Boxing writer Wilson Pitts, former world champion Wayne McCullough, and many more.

His current campaign is based off of many factors. He is currently expanding and renovating the “Mark Villanueva Boxing Academy” in Iloilo City, Philippines. This gym will be open to ALL youth in poverty throughout the surrounding areas. Prior to that the academy needs much renovation though. With damaged ceilings, exposed wiring and various structural damage this gym is still too hazardous to use. So Mark needs your help.

Mark had an estimate done on the needed renovation needed, it will cost about $4,000 USD (160,000 PHP). There are 20 days left in his groundbreaking campaign with just over $1,,000 needed to go! If this goal is reached Mark will be one step closer to saving hundreds of suffering children in the Philippines. And your spare change can do it all.

Not $1 will be used for personal gain. If the goal amount is broken prior to the end date of April 29th the remainder of the money will be used for new gym equipment to further improve the gym environment.

Not many people would dare to step their feet into this task. The common man may yield to the pressure placed upon him. That man is not Mark Villanueva. A man who dares to dream. A man who willfully works two full time jobs just to keep his dream afloat. Life is a fight, and Villanueva will not take a knee until he leaves with a knockout.

Learn more about Mark’s loyal work here. It features more information and proof about one man’s dedication to change an entire local society.


Mark currently lives in Iloilo City and can be followed through http://twitter.com/markfvillanueva
Posted by Mark F. Villanueva at 8:29 PM