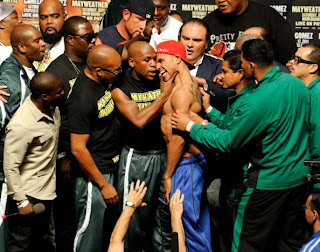 A day before Victor Ortiz finally enters the eye of the storm with the biggest fight of his career against Floyd Mayweather Jr. it seems that the current WBC Welterweight champion's character is taking a back seat to the former. Floyd Mayweather Jr, who is also a former holder to the title at stake, appears to be never out of stories to tell and, love him or hate him, he is doing his part of the job to sell the fight to the public much better than his counterpart, who seems to be less creative and perfunctory.

Incidentally, a boxer's personality is often seen in the way he actually fights in the squared circle. Just as one might observe about Victor Ortiz in the running HBO 24/7 series his fight approach, too, is more or less one dimensional. If the show dedicated most of its storylines on Ortiz it would probably be dreary, so when it starts to dwindle the cameras quickly shifts back to Money's team that's always up to something new.

Speaking of something new, my guess is that's going to be the most difficult subject the Mexican-American, Ortiz will have to handle during the fight. Victor Ortiz is younger and seems to be stronger, but like most young fighters out there he is all too predictable. I don't see this as a fight that relies heavily on physicality. Floyd Jr. is too smart to do that against the bigger and seemingly stronger guy, but he may go for it when the opportunity arises late in the fight. It's hard to tell. That's the beauty of it- Floyd Mayweather Jr. is too intelligent in the ring and too skilled, and he likes to shuffle his game, so it's hard to prepare for him. Before he fought Shane Mosley everyone was saying he is going to box him and move around, but that never happened. He stayed in front of him right at the very outset of the match, and even after he got rocked with Mosley's hard right hand he never tried to run off to clear his head. Floyd Mayweather Jr. talks you into doing things as if building a trap for a coming fight. And when he fights he mixes things up and confuses his opponents which eventually tires them, so Victor Ortiz should stay undeterred all night pursuing him if he wants to win this. The latter looks lame on Television. Let's hope it doesn't translate to it when he is enveloped by Mayweather's brainstorming fighting style.

Mark currently lives in Iloilo City and can be followed through http://twitter.com/markfvillanueva
Posted by Mark F. Villanueva at 12:53 PM