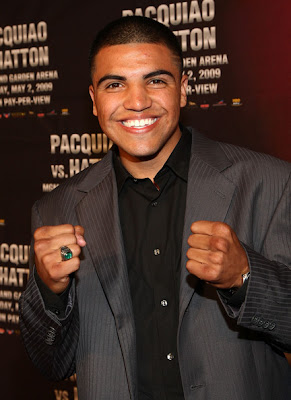 I can see how Victor Ortiz’ promoter, Oscar Dela Hoya is also his number one believer. They’re both Mexican-Americans with talent and skill to complement their power, and Ortiz has raw power in both hands. Victor is called “Vicious” for a good reason: he has a crowd pleasing fighting style and is very aggressive, always looking to force the action in the ring; And Victor has that charm and rugged good looks that could pull that star status like a halo up above his head. In a way, they are much alike. Whether he has the elements and that broad smile to capture an even wider market, we all have to wait and see. Around two years ago when Oscar Dela Hoya cashed in on these factors and predicted him as the next golden boy of boxing things were looking good up ahead and the stars were indeed starting to align in his favor. Everything seemed to glow yonder the horizon for Ortiz’ up until he unexpectedly hit that Argentine bloc of force in the form of Marcos Maidana, who knocked him off the path to success.
But for the Mexican-American prizefighter, Victor “Vicious” Ortiz the prize of winning against Andre Berto last April 16, 2011 shoots beyond the rewards of gaining the WBC Welterweight title and settles at a higher plateau of that much sought regained respect. Every fighter is as good as his last fight, so they say, and Ortiz’ last one is a running contender to fight of the year for 2011. In fact, he was so good in that fight that he is now regarded as among the top Welterweights in the world, and that prior knockout loss he suffered against Maidana in 2009 has become a wound in the distant past which time healed nicely.
At the age of 24, the young and volatile Ortiz has switched from being a strong up-and-comer to being touted as the next big name in boxing, down to being an exposed fighter and now ranked by many boxing sites as being one of the top two Welterweights in the world. Still riding that natural high of capturing the WBC Welterweight belt, the question that looms over the new champion is, will he finally be able to overcome that instability and show to the world his championship win was not a mere stroke of good luck? Is he ripe enough to be plucked from the common and placed amongst the elite in the sport? For certainly, his next opponent, Floyd Mayweather Jr., at this point in his career doesn’t need a belt around his waist to be considered one.


Ortiz brings a lot of interest with him each time he fights not only due to his personal and professional background, but ‘cause he carries so much passion as a fighter.  Almost like Oscar, he always comes forward with his arms up, looking boxy and basic. He comes in with that strong upper body figure and a decent jab, and being a lefty could pose some difficulty against Mayweather Jr. to some degree. With the conditioning he had against Andre Berto maybe he'd have enough energy to fuel the same long pressured attack De La Hoya applied against Floyd Jr. and there's a possibility that Ortiz could actually finish the job Oscar De La Hoya nearly accomplished back in 2007. If only De La Hoya had not stopped throwing those jabs at Floyd Jr. many agree how he really could have won that fight, and just maybe the energetic Ortiz could attempt to finish what he had started with youth on his side.
Whether Floyd Mayweather Jr. has chosen to fight Ortiz, being a southpaw, as a preparation for his potential fight against Pacquiao, doesn’t really matter at least for now that neither party has found any solution to that blood testing bedlam. Nobody really knows how the future of that fight is going to unfold, if it all; however,
against Victor Ortiz, the latter appears to be the young Padawan up against a master Jedi
.
Even if the younger Victor Ortiz were to fight at a much later date against an older version of Floyd Mayweather Jr., one who’s a bit past his best years, even that match up would still be a tough fight to call. Coated with slick and armed with skill, it is actually the intangible that is going to be the toughest quality to overcome when he fights the black American. Floyd Mayweather Jr.’s experience will overshadow whatever physical advantages Ortiz hopes to bring at the day of the fight. Mayweather Jr. will come in with that uncanny ability to run over the fight in his head in a way Ortiz can only dream of. He has the gift of foresight, deception as well as strong anticipation, and timing not every fighter is ensured to develop over the years. Floyd Jr. is that type of fighter who doesn’t rely as much on the physical as on the mental aspect of the game, and he is very clever at what he does. He is unpredictable and, therefore, difficult to trap but very perceptive when he decides to lunge an offensive. He’s a natural fighter. Needless to say he is equipped with so much talent and superb skill sets as well, which makes him the undefeated fighter he is now.
From supreme talent we go back to the tangibles. Victor Ortiz seems to have successfully carried his power moving up to Welterweight, which will be very crucial in his next fight. That’s what he needs to keep the pressure on Floyd Jr. altogether with endurance and stamina, but fighting flatfooted won’t help to further his cause. He needs to step up on his speed to actually apply that pressure and keep up with Mayweather Jr., who can be very flitty and stings like a bee. Two of the many things Floyd Jr. is very good at are striking that lead straight and a left hook. That same left hook that knocked down Marquez, and that check hook that made Hatton bang his head at the ring post. Whether it is accountable to his fighting style or frigid fight stance and less upper body movement, Victor Ortiz seems surely to fall prey to Mayweather’s lead right hand straight. I can see him eating those shots all night. If he took too many of those from a slow and predictable Marcos Maidana he surely will be receiving more from an elite fighter this time around. In his past fights he has been very vulnerable to counter left hooks too, which Mayweather executes to perfection. He also needs a quicker snapback whenever he throws his left straight or he’ll get beaten to the punch with counterpunches each time.
Whether we attribute it to his enthused fighting style or mere unfettered youthful aggression, I personally think Victor is too vicious that he overly commits when he fights, so when he’s at it he tends to disregard keeping the technical aspect of the fight game. He is exciting to watch ‘cause he can knock you out anytime, but the same goes with him. I just hope he won’t leave too many windows open against a straight shooter like Floyd Mayweather Jr.