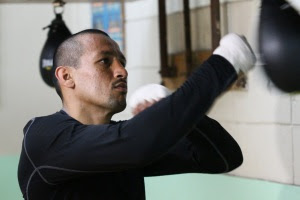 Other things could have happened at the eighth round that ended in a stoppage. Amidst that hellfire targeted at him, the defending WBO Featherweight World Champion could have used the ropes and shelled himself for a defensive cover, moved around the ring to buy him more time to clear his head, or, he could have realized in flash that it was the best time for him to pull off a Bernard Hopkins tactic by bracing his opponent off his punches to avoid further exchange. There was still a slight chance the fight could have lasted a little longer where in boxing anything can happen in such a short span of time. Looking back at that moment now it seems unlikely, but still its possibility and the lingering question of “What if?” could not be totally ruled out had the fight not been stopped prematurely. The defending champion Juan Manuel Lopez had enough time to do any of that had it dawned on him as he battled on survival mode from the corner of the ring as his challenger came in to close the fight. His punches were weak but they were there alright, and his legs were rubbery, but I wouldn’t be surprised if he came up with something clever in the heat of exchange owing to his warrior nature. After all, he was still right there returning fire. What might have occurred in a nick of an instant longer is something we will never know as the referee came in to wave the fight off to the chagrin of the hometown audience. From that point on I thought to myself, “I hope this ref has got the chin and defense to survive this maddening crowd.”
Right from the start, Juan Manuel Lopez’ punches were heavy as usual. In fact they may have been too heavy perhaps that it didn’t have that snap back needed for cover after each swing. He came in to stand and fight as he’s been known for as a knockout artist and the hometown crowd grew rabid about this. His opponent, the Mexican, Orlando Salido, who had a tricky record of 35-11-2(Draws)-1(No Contest) coming in, moved about cautiously to test his strength.  Lopez’ hooks weren’t finding its target early but he kept on moving forward; like a carrier slowly gearing up for war. Salido would time incoming punches and instantly nosedive towards Lopez to land a few body shots and finds out early on that it worked. He would duck in quickly for some more and dig to the body that got him warmed up owing to its success, and distracted the Puerto Rican champion who appeared slow and heavy, yet so must have been his punches. It was this game plan that would dominate for the rest of the night.
Seconds before the end of the fifth, Salido now had momentum with his game, which style kept on disrupting Lopez’ rhythm. He was now moving forward and keeping up the pressure. The Mexican feigned going to the body by lowering his knees, and a projectile of a right uppercut rocketed high up that barely missed Lopez’ head from down under. Now being on the defensive stance leaning back, Lopez became a clear target of a subsequent left punch and a wicked swooping right hand which came hurtling from nowhere that knocked him down hard to the canvas in front of his own crowd. Apart from a ripping overhand right that worked for him all night, the Mexican contender would apply deception by attempting to move down to his opponent’s body and surging back up with a left hook that became a new found weapon. Then he would push him back again with his straight right hand and later on mix it up that left Juan Ma confused all throughout the match.
Juan Manuel Lopez was gallant in his efforts to defend his title afterwards but he was never the same since that knockdown. Some say he was not the same fighter right at the start of the first round that night. Some say it must have been his out of the ring issues that changed him, and maybe it has some sense to it, but I don’t think I’ve ever heard Orlando Salido make a single excuse of his eleven loses to his record coming into this fight being a heavy underdog. It was clear that his game plan was working perfectly and so we couldn’t take that away from him, personal matters aside.
Orlando Salido may not be the most graceful or talented of fighters out there but he comes to the ring and brings his best. He fights doggedly as a hardworking pug and does not seem content to leave matters to “What if”.
Orland Salido. We salute you!
Mark F. Villanueva
Philippine Islands
BoxingInsight.blogspot.com
Mark currently lives in Iloilo City and can be followed through http://twitter.com/markfvillanueva
Support his page at www.Facebook.com/MarkFVillanueva.BoxingArticles
Posted by Mark F. Villanueva at 3:10 PM