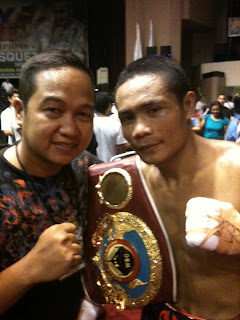 It was Donnie Nietes’ first fight at the 108lb division after coming up from the Minimumweight class, but it seemed as though his diminutive opponent from Mexico was the one moving up. The WBO Minimumweight World Champion was beaming with confidence in his corner, waiting for the bell to signal the fight, staring at Armando Vasquez, who made a promise not to run away from him in the ring. The whole crowd waited in anticipation, perhaps expecting Nietes to win handily in his hometown. Donnie looked real good physically. He knew he had a three inch height advantage over the 5’0 Vasquez with a significant reach advantage to go with it.
When the bell rang both fighters almost instantly exploded towards the middle of the ring, moving in to seize each other up. Nietes’ harpoon jabs immediately posed a problem for the game Mexican who deflected them with both hands up, showing decent defense. Both were moving really well into the fight, and when Vasquez made a mark with the first power punch that landed clean on Niete’s face the crowd oohed in excitement. ALA Promotions had done a splendid job for the whole event, packing in a good undercard list, and the crowd in Bacolod was thrilled to watch their very own local hero showcase his talent. After the fight, in a Videoke bar, Donnie Nietes told me personally in our semi-victory party that he had come prepared to fight a long match and that ALA Promotions conditioning coach, Pio Solon had done really well preparing him for it.


Donnie Nietes seemed to have found his new home at the 108 weight class, but the Mexican stood his ground. He came at the Filipino with speed and good combinations to the body as the latter employed his technical skills to defend himself, at times moving out, stepping back to suck him in for a counter. Donnie Nietes was cited as among the top five 105 pounders of all time by Bert Randolph Sugar and Teddy Atlas’ “The Ultimate Book of Boxing Lists” and that night I witnessed this in truth from the press row. I leaned forward intently to study his moves and witness him perform. The whole crowd was locked in to the fight. Yet before I could immerse myself completely onto Donnie Nietes’ artwork he had pushed himself forward to corner his foe and found an opening for a wicked right hook to the Mexican’s chin that abruptly ended the fight.
Donnie Nietes’ made a clear statement that night and made us all want for more.
Mark F. Villanueva
Philippine Islands
Mark currently lives in Iloilo City and can be followed through http://twitter.com/markfvillanueva
Posted by Mark F. Villanueva at 12:28 PM