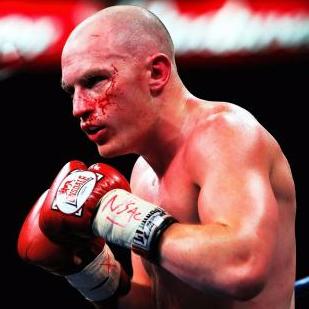 Being an art of governance, in reality, politics has become one of today’s pervading ironies. Its actual practice undermines the very same order of things it’s supposed to uphold, and Matthew Hatton knew fighting Saul Alvarez for a title match was not his place. He doesn’t have the ranking to be a contender at that weight class and Alvarez, on the other hand, never fought the big names in that division to be given a title shot. It was like playing chess with the wrong pieces moving in the wrong directions.
At the end of the Junior Middleweight title bout last March 5th at the Honda Center in Anaheim, California, Matthew Hatton, who has been fighting for a long time under the shadow of his brother, former world champion and British boxing star, Ricky Hatton, surprised spectators by simply making it through the fight standing. Overall, he had taken eighty eight hard shots to his body and two hundred five to the head that shook him on many occasions but he never went down even once. He had been advised not to take this fight, which was against a naturally bigger opponent in Saul Alvarez yet he took the challenge anyway and accepted his role as the sacrificial lamb to the groomed Alvarez.  Hatton lost every single round of this match up, except the seventh when a point was deducted from his opponent for punching him after the referee stood in between to break them up. In the end of the twelfth round he stood up there pale against the spotlight with a bloodied nose and a slit above his eye without having lost a bit of pride even after the way he was beaten. Hard punch combinations threw him off balance and against the ropes yet he fought back courageously all night. Right at those moments when you felt he was definitely hurt and done with he just astonished everyone by instinctively firing two to three shots back, perhaps in desperation, like an animal stuck in the wrong place at the wrong time.
Matthew Hatton should have took his brother’s advice and walked away from a fight he didn’t need, but like his older brother he wanted to believe he had it in him to be the next Pride of Hyde. His pride was there alright, but he was too small and his punches were too light for his foe to respect it. Alvarez looked frigid and never seemed to show head movement, but I feel he never had to against Hatton.
Matthew Hatton fought for every person living under the shadow of a more popular member of the family who simply wanted a tap in the back or an equal share in the spotlight, and I’m writing this now to give brave Matthew the acknowledgement he deserves.
After having fought for a long time with less recognition under the cold dark shadow of his legendary brother, Matthew Hatton finally got his chance and stood proud albeit in defeat. His courage was as red as his blood that stood out strongly against his pale skin.


Mark currently lives in Iloilo City and can be followed through http://twitter.com/markfvillanueva
Posted by Mark F. Villanueva at 1:06 PM