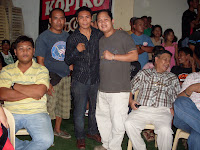 In a crowded arena late last year in Bacolod City I carefully weaved through seated spectators so I could speak with WBO Minimumweight world champion Donnie Nietes, who was kind enough to acquiesce. It was our first time to meet face to face. Standing side by side, I realized he looked much smaller in person and how much I needed to trim down. Like most Filipino world champions, Nietes spoke in a soft and humble manner as I asked him about his early career and further out as to how he became a boxer from being a janitor working under Antonio Aldeguer’s ALA Boxing Gym. He’s a very low-key guy and conversing with him at that moment humbled me. There’s nothing about him that tells you of what he does for a living and the guy at the gate checking for tickets even looked more intimidating. I don’t even remember him coming in with a bodyguard and those who wished to approach him in the arena for a quick picture taken didn’t have to fight their way through.
He relayed how he would observe the regular fighters training at the gym back in the day and try to emulate bits and pieces of knowledge he got out of what he saw as if fitting in a puzzle, watching alone from one corner during his free time as a utility man and caretaker of Aldeguer’s pet snake from which later on his nickname “Ahas” would be derived. Imitating the moves, checking out his own form and shadow behind the walls of the gym, he just wanted to be like one of the guys in the gym and never expected those solitary activities to be the small start of the making of the world champion he is now as he would later on be encouraged to learn the basics of the sport with the regular practitioners. Asked about how far his financial status had increased over the years from being a nobody to being a boxing star, Nietes quickly veered away from the question and simply stated, “okay okay lang.”, which translates as being just enough, speaking with his naturally humble nature taking over.
With a fight record of 27 wins 15 by KO 1 loss and 3 draws and four successful defenses to his world title, Donnie Nietes remained almost unnoticed amongst a cheering crowd and I had a feeling that’s just how he wants it. I bet he’s still that same person who used to watch silently in the corner, except this time he watched as a champion but with the same poor man’s eyes and calloused hands which tell you that hard work knows no bounds. I remember all these today as he won by Unanimous Decision against Mario Rodriguez in his third defense in Mexico. He comes to me as a no-fuzz guy who prefers to do what he does best with not much fanfare, and any opponent he may be facing next ought to know humility could be downright deadly.
Congratulations once again to you Champ!
published on:


Mark currently lives in Iloilo City and can be followed through http://twitter.com/markfvillanueva
Posted by Mark F. Villanueva at 12:30 PM