Margarito versus Pacquiao- Reap What You Sow

When I think of the word Paris I’m reminded of the finer things in life. Last night I thought of our old coffee shop back home in a city that looks more like a town to me. Paris in itself is such a fine, fine word that may singlehandedly take away the fuss just thinking of it in a stressful day at the office. It summons words akin to it such as love, good food, enchanting sights, art, and structures; Now thanks to Antonio Margarito, who is not an artist, at least not in terms related to anything delicate and decent, and who is not an architect or craftsman of art structures but uses plaster yet in a deadly way, a tainted meaning is now embedded to the Plaster of Paris.


In hindsight, it seems clearer now after all the revelations in the past days of both Pacman and Mayweather’s camps lies that the Mega fight was never intended to happen at all, at least not this year. To me, it seems like Top Rank big boss Bob Arum wants to make a milking cow out of Manny one more time via Mexico, or maybe the U.A.E. depending on how much money gets laid down on the table before Pacquiao meets his ultimate match in Mayweather, and then maybe calls it a career.  He said it himself that he spends so much money on building up the careers of his fighters and it’s not hard to comprehend that he wants one more squeeze for a return in investment. So milk it, Bob, milk it good.
I am one of those who are slowly yet very consistently getting tired of hearing about the Pacquiao versus Mayweather fight not happening. So much that sometimes when I think of it, it seems like I get to a point of being sick in the stomach that Pacquiao versus Margarito becomes like a fresh breeze, although it really isn’t. But at least it’s real and believe me, or, believe Bob, it’s gonna happen, which is better than just pondering on a Floyd Jr. fantasy match.
Antonio Margarito keeps no secret in the ring. He comes in to fight and brings the fight to you, always coming forward with or without cement wrapped around his fists. That’s how he is as a fighter. He just brings it on and slugs it out. He holds a Compubox record for most punches in a twelve round match, so go figure. He is also the perfect fodder to the Manny Pacquiao Farmville.
He always fights with both his hands held low, exposing his face (maybe ‘cause he wants us to see him grin even when eating punches) and he has no head movement whatsoever. I think that maybe he’s used to it on account of his height being taller than most boxers he’s fought against and will ever face in his career but that’s not going to work for him when he fights someone of Pacquiao’s caliber. I feel that Antonio Margarito in his best day won’t last ten rounds against Manny, and if you’ve seen his last fight against Roberto Garcia you’d say it was quite a mediocre performance.  It’s easy. What Manny can hit, Manny destroys, and Margarito can easily be hit with your eyes half closed.
Many believe that the Tijuana Tornado does not deserve to be matched with the Pound 4 Pound King after all the controversies that swirl around him after the plaster inserts were taken off his wraps prior to the Mosley fight. I personally think it’s unimaginable that a fighter would not know what is being placed on his hands and I dare say he intended to cheat against Mosley unless if he was in deep slumber when those wraps were fixed, which is absurd.
Margarito clearly does not deserve this fight, but like all those who cheat, the rewards come as easily as they go. Ultimately, up there, up in the ring, he is going to get punished. We reap what we sow. 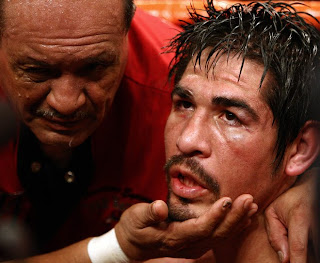 Mark currently lives in Iloilo City and can be followed through http://twitter.com/markfvillanueva
Posted by Mark F. Villanueva at 11:36 AM